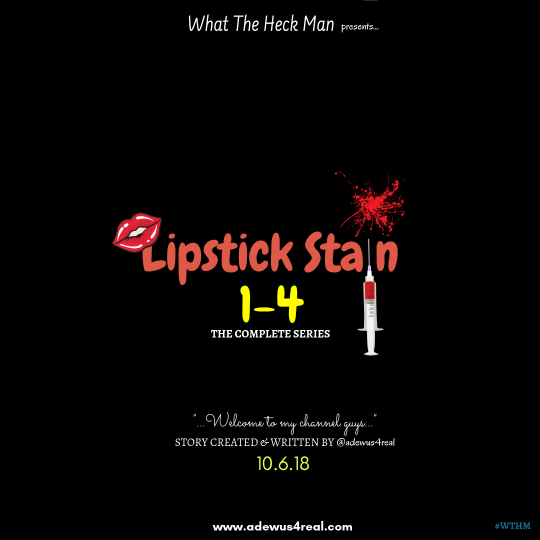 Ringing.
Loudly. All I could hear was a ringing sound.
It was like someone slapped me blind and I was dazed.
I didn’t hear the last few words that came out of Lolade’s mouth as I turned to Lade who was struggling to sit up.
I stared for a few moments.
There were definitely words to be said and I wanted to blurt them out but somehow I couldn’t.
My eyes began to well and I think I was finally at my breaking point. I finally choked it out

“Lade *voice trembles*…please tell me she is lying”

She didn’t answer.
She looked down and away from me.
The anger inside me swole and I yelled out

“Lade! tell me she is fucking lying”

Her mom jumped in and said

I turned to her and said

“Mummy, with all due respect, stay out of this!!!”

She stepped forward and said

“No! I will not allow you to speak to my daughter that way.
She made some mistakes but yelling at her is not the answer”

“Yelling???
Between her getting shot and not even knowing what was going on, I find out that I could have been a father and I am supposed to speak calmly.
Are you kidding me?”

Before her mother could respond, Lade jumped in and said

“Akin, you have every right to be angry but just let me explain, it is not what it seems”

I scoffed and said

“Two months ago, I got set of pictures and videos from the night of your bachelor party.
It basically showed you having what appeared to be a good time and then in one of the videos, it showed one of the strippers leading you into a private room.
And when you emerged, then were lipstick stains on your shirt.
A shirt that never made it home… the message also said that you had sex with one of the women”

“I was so hurt and I made the mistake of seeking revenge instead of asking you.
So I hit up an ex boyfriend of mine who I knew was having a party one weekend and I went. I honestly don’t remember what happened but the next day I woke up in his bed with him next to me, completely naked.
I swear Akin, I didn’t sleep with him.
I checked everything and I even asked him later. He said he did not know but I was sure nothing went inside me that night.

So when I found out that I was pregnant, you can imagine my confusion. Everything within me felt like it was yours..ours…but I had to be sure.
I told my mom and I was going to tell you but I wanted to be sure it was ours.
But before I could even do that, I was getting blackmailed.
They were asking for N3 million. I didn’t know what to do and I did not want to freak my mom or anyone else out, so I went to this snake Lolade.
She promised to help me find the person but quickly turned and started telling me to go and give them the money”

I turned to Lolade who was almost walking through the closed door.
if she could run, she would have.
Lade, slightly emboldened, continued to speak

“Lade must have seen it as an opportunity to cash in. Because suddenly, she was talking about being the liaison between me and the blackmailer.
At first, I thought nothing about it but then…”

There was a knock on the door.
All our heads turned to the door.

The two policemen that interrogated me a few days before walked in.
The sergeant spoke first, I had learned his name was Mr. Adedigba

“Hopefully we are not interrupting anything. We just have a few questions for you ma”

You could pick up the strong old Oyo accent as he directed his gaze towards Lade.

I jumped in and said

“Right now?
She is still recovering”

He smiled and snakily replied

“And you think the person that shot her is still recovering?”

He had a point, if it was Lolade or someone else, the longer it took to catch them, the more time they had to get away with it.
He looked at Lade and asked

Before he finished his question, I interrupted and said

“Officers, my wife said that this woman here is the reason she got shot. This is your suspect here”

I pointed at a now flustered Lolade.

He looked at Lolade and then at Lade before saying

“Madam is this true?”

Lade shook her head to my surprise and said

“Yes and no.
I believe that she may have something to do with it but she was not the one that shot me”

Lolade appeared to heave a sigh of relief.
The sergeant turned to Lolade and said

“Is this true?
Did you have something to do with the shooting?”

She stood straight and said with confidence

“Officer, I had nothing to do with it.
I don’t own a gun or talk less know how to use one. I didn’t do anything. She even told you that I wasn’t there.
It’s not me sir”

“Well, my aim is to get to the bottom of this situation as soon as possible.
Madam, I am going to need you to come down to the station with us”

Lolade was terrified.
She wanted to run but knew that would be unwise.
And almost as if the universe was singing her name, there was a quick knock on the door and it opened.

It was the doctor.
He looked surprised that the room was packed, but his immediate concern was Lade.
he quickly said

“Lade, you should be resting. Please lay down.”

He stood next to her and said

“Can everyone please exit the room and give us some privacy please?”

We all began to shuffle out and he said to me

Everyone else waited outside the room.
I stopped as the door closed and the doctor said

I walked to Lade’s side and held her left hand.
She squeezed my hand as he began to speak.

“One thing I didn’t get to tell you the last time Akin because you were around people is that we are super pleased Lade survived that horrible experience.
But I think the two of you are going to need each other more than ever.
Two of the bullets punctured Lade’s womb and it may make it almost impossible for her to have children on her own.”

My soul was crushed.
Lade squeezed my hand really tightly as she burst out into tears.
She kept saying

My heart was broken but watching her in tears was breaking me further.
I leaned in and said through my tears

“It’s okay baby. We will get through it together”

“You both know that we will be with you through everything. Anything you need”

He got up and walked out.

I was instantly filled with rage. My heart had taken enough.
I got up and stormed out of the room into the hallway. Lade tried to hold me but I broke free. I swung the door open and I said to the sergeant

“Don’t believe anything she says. Search her and her place.
She is involved!”

My face was soaked in tears and holding pain as the sergeant asked Lolade to open her purse.
She quickly opened it without any fear.

He put his hand into the bag and moved it around.
Suddenly he stopped, he looked up and around to all of us before pulling out my gun.

I have never seen Lolade appear so small before.
She immediately said

‘That is not mine”

“Madam, you can explain how an attempted murder weapon ended up in your bag at the station.”

He grabbed her by the arm and walked her out.
Lade’s mom was speechless and I re-entered the room.
The rest of the evening, I climbed into the bed and laid next to Lade holding her.
We were going to get through it.
No doubt.

She finally fell asleep. I turned and kissed her on the forehead as I held back my own tears.

~New series next Saturday? 20 comments and we have a deal~

I turned around the corner and walked into the bedroom.
I handed Lade a cup of tea and leaned in to kiss her.
She giggled and said

with that beautiful smile across her face.

Her phone buzzed and she reached for it.
She used her right thumb to unlock the phone before saying

I was actually taken aback. We hadn’t heard anything about Lolade and anyone from that phase in a long time.
I asked

I shook my head and said

“Akin, you still never told me how that gun made it into Lolade’s purse”

I smiled and said

“I had nothing to do with it. Just like I know you know nothing about this stabbing”

Lade smiled and shook her head. She placed her phone down and said

“One day you are going to tell me what really happened.”

She motioned to me and I came to sit next to her.
She turned, looked into my eyes and said

I smiled and said

“I love you too my Queen”

as I leaned in to kiss her.

We both looked up as she said

“Hi guys! Welcome to OUR channel”

she glanced at me as she said it.
Then she made me turn my head as she wiped off a Lipstick Stain from my lip.

She turned back to the camera and said

“Hey all, if you didn’t watch my last video about our gender reveal, click on the icon on your screen right now…
but to our repeat viewers and subscribers, thanks for coming with us on this journey.
As some of you may know, I was told I may never be able to carry my own children and in two months, we are expecting triplets!
Who would have thought it right?
We guess God has a sense of humor but we are so glad we get to share this experience with you.
But I could never have done this without my superman husband. So thank you babe”

She smiled and looked at me
I smiled back while resisting the urge to kiss her.
Lade continued and said

“So guys, we are doing an incoming baby tag, things we want our children to take or not take from either of us.
Babe wanna go first?”

She turned to me and I said

“The main thing I don’t want my children to take from my wife is her snoring. She snores for Africa.
It’s like grunting pigs”

She punched me in my arm and said

“Akin what the heck man!”

I smiled back and rubbed her swollen belly.
We were about to become a family and in that moment, everything else felt like a blur.

HOW WAS THE LIPSTICK STAIN SERIES FOR YOU? WHAT DID YOU FEEL? DO YOU HATE ME YET?
It was an honor writing it for you all. I am glad you enjoyed it!

~New series next Saturday? 20 comments and we have a deal~

Thank you for reading and commenting. You are highly appreciated.